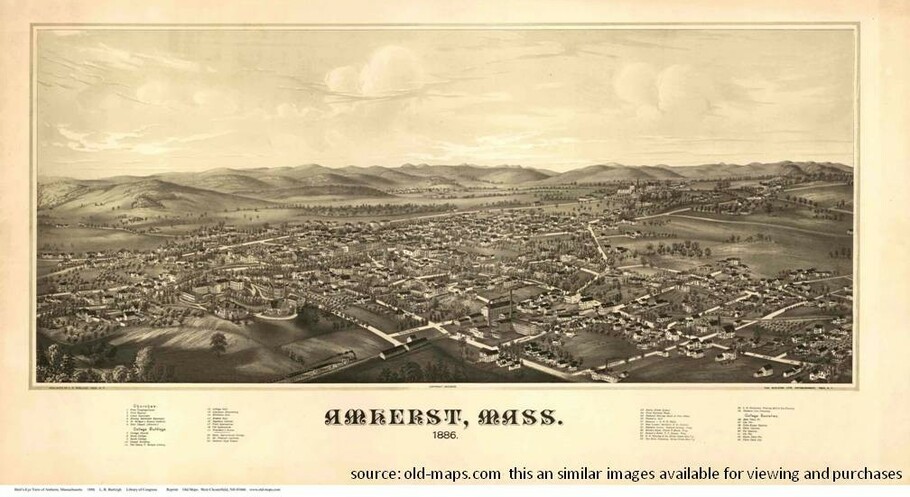 Black History in the Town of Amherst Massachusetts

West Cemetery is located on Triangle Street in Amherst Center. Founded in 1737, it was added to the National Historic Register in 2000. West Cemetery is significant to black heritage in Amherst because it is the resting place of African American residents. The racialized legacy of the past is embodied in the segregated burial plots. Even after death, in these times whites and blacks remained segregated.

The layout of West Cemetery is indicative of the discriminatory practices of the past. While West Cemetery is a reminder of black marginalization in New England, it is also a reminder of black involvement in Amherst. Many black Civil War veterans are buried in West Cemetery. African American veterans are acknowledged with decorative American flags and various notes detailing the service of some black soldiers. Emily Dickinson, along with several members of her family, rests here. According to staff at Amherst’s Town Hall, the cemetery is currently undergoing renovations, which include restorations to gravestones.

Civil War involvement for the black residents of Amherst was symbolic of the increasing inclusion of blacks into society in Amherst. Massachusetts was the first Northern state to be authorized to train large black regiments for regular combat duty. In The History of the Black Population of Amherst, Massachusetts 1728-1870, author James Avery Smith explains the impact of the Civil War on the African American community. Smith writes, “…the largest single impact the Civil War had on the black community came from the military service of black men from 1863 through 1865” (p. 40). The 54th Massachusetts Volunteer Infantry Regiment was the first all-black infantry unit to become part of the Union. Colonel Robert Gould Shaw led the 54thRegiment. The movie “Glory” depicts its creation and participation in the Fort Wagner assault in North Carolina (Romer “Amherst’s Black Civil War Veterans”).

Not surprisingly, white hegemony permeated the military ranks, which were segregated. The accounts of black Civil War veterans buried in West Cemetery reveal that egalitarianism between blacks and whites did not exist. Black soldiers were considered expendable. Accordingly, African Americans were first in the line of battle. The job assignments for black military men also reflected their status in society. Black soldiers were usually assigned to perform auxiliary tasks or ‘fatigue positions’ digging holes, unloading supplies, and building fortifications (Smith p. 41).

The polity of whiteness ensured unfair treatment for blacks in military and civilian settings. As much as this is true, it is also true that blacks possessed agency and advocated for themselves. African Americans were not complicit in their subjugation. Smith illustrates this point, stating that despite discriminatory treatment, “blacks refused to take pay that was lower than white soldiers who were in the U.S. Military” (p. 40). Unequal relations of power did not prevent African Americans from challenging existing structures that negatively impacted them.

Civil War veterans fought on the battlefield and home front simultaneously. While fighting the Confederacy, African American soldiers had to fight for full integration into a society that profited from their oppression. Both the occurrence of the Civil War and the segregated burial sites of blacks in West Cemetery reveal the complex negotiations and intersections of black and white heritage in the Pioneer Valley.

The experience of blacks in Western Massachusetts is evidence of a time when blacks resided in a Republic that made them invisible. African American citizenship was constantly negotiated in a manner contingent upon their subservience or inferior status compared to whites. The complete abolition of slavery by the Thirteenth Amendment of 1865 guaranteed freedom for the nation’s former slaves. While on paper African Americans went from ‘slave’ to citizen, freeing the enslaved did not guarantee genuine citizenship. The newfound ‘freedom’ of the formerly enslaved did not make them automatic recipients of their entitlement as citizens within the very nation they had stake in creating. The elimination of slavery forced the American elite to grapple with the idea of actually realizing black citizenship. The new republic denied black people protection, which ultimately disenfranchised them. State repression positioned African Americans precariously between the boundaries of subject and citizen. When it behooved whites to include blacks they did so, like in times of military or economic need. Town taxation policies are symptomatic of this ‘conditional’ inclusion:

“In 1850 the Amherst Board of Assessors reported that there were 15 adult males not taxed and not supported by the town. The people not taxed appear to be the black male head of households. In 1865 this taxation policy changed and the respected teamster, Henry Jackson, was charged a poll tax and a property tax” (Smith p. 28).

Conversely, black rights of inclusion within the nation were not wholly enacted because true citizenship could only belong to whites.

The heritage of African Americans in Amherst is an important story in a narrative comprised of many interactions, voices, and experiences. West Cemetery should be a Historic Black Heritage site because it provides physical evidence of black life in Amherst. It served and continues to serve a catalyst for conversation about the role of African Americans in the formation of this country. Preserving black heritage directly challenges the hegemonic production of knowledge about black life in New England. It too is a form of agency and an act of resistance by virtue of being available. The black participants of the Civil War, as well as their civilian counterparts, were struggling to pass existential tests of Western rationality that continuously sought to keep full citizenship, an thus full existence, out of grasp.

Today’s struggle has much in common with the heritage of the past. It insists that the lives of blacks will not suffer invisibility due to forgotten heritage.

Black Life: The Citizen and Subject in Times of Peace and Times of War

Below is a list of black soldiers buried in West Cemetery. These excerpts, compiled from cited resource sources provide a small glimpse into the lives of black populations in Amherst. This information can potentially be used in signs and pamphlets to highlight the African American section of the cemetery and provide information to visitors about their contributions. This information could be presented in continuity with other noteworthy figures. The intent of this project is not to repress other narratives, but simply to make a space for other perspectives that are also valuable and integral to the fabric of our society.

Sanford Jackson (Amherst): Jackson died in a hospital at Beaufort, S.C., Sept. 13 1863, of gunshot wounds during the attack on Fort Wagner. Sanford was married to Angeline Palmer. Sanford was one of three sons born to Richard and Polly Jackson, residents of Amherst.

Charles A. Finnemore (Amherst): Finnemore enlisted in 1863. He resided with Christopher Thompson. Charles participated in battles of James Island, Fort Wagner and Olustee. He was wounded Feb. 24, 1864, during the battle of Olustee, Florida by Confederate forces. Finnemore injury resulted in part from the common practice o the “Union Army to place the ‘colored’ regiments as buffers between the main body of Union troops and oncoming Confederate forces” (Amherst’s Black Civil War Veterans). Finnemore was dischared as a private. Charles was photographed in Amherst in 1895 during a gathering for the Grand Army of the Republic (Civil War veteran’s group).

John N. Langley: Langley was originally born in Rutland, Vermont. When he enlisted he was new to the town of Amherst. He served as a private in the Union Army. Eventually he was “invalidated out at Beaufort, S.C., due to a self-inflicted wound (Romer, “Amherst’s Black Civil War Veterans).

Jason Champlin (Shutesbury): Champlin was an Amherst native and a farmer in Shutesbury. He was the oldest son of James and Catherine (Vernor/Vennaul) Champlin, and older brother to Dennis Champlin who was part of the 55th Massachusetts Infantry Regiment. In August 1863 Jason was enlisted as a replacement for Hiram Smith, who paid Jason $300. Champlin served as a private until he was killed in the rearguard battle of Olustee, Florida.

Jarvis Jackson (Amherst): Jarvis was a teamster prior to the war. He died in a hospital at Brazos, Texas due to malaria. Jackson’s brother was Sanford Jackson of the 54th Regiment.

John D. Thompson (Amherst): Thompson was born in Hatfield. He was the brother of Henry Thompson. Before enlisting on December 12, 1863 John worked as a farm laborer in Amherst. Three months later, Thompson died on March 12, 1864 at Camp Meigs in Readville, Mass. Injuries obtained in a fall resulted in his death.

Arthur Jackson (Shutesbury): Jackson was a farmer before enlisting. He survived the war but died of typhoid fever in Amherst. The Amherst Selectmen tried to charge the Town of Shutesbury for the cost of Arthur’s burial at West Cemetery.

Henry Thompson (Amherst):Thompson was born in Pittsfield. He was the oldest son of Stephen and Margaret (Gray) Thompson. Henry worked as a laborer for the L. M. Hill Company at Amherst before enlisting on January 4, 1864. He was joined by his brother Christopher and received $125 bounty. While enlisted he worked as a cook. Henry died in a hospital at Brazos, Texas, on October 9, 1865 due to apoplexy. His death occurred just twenty-two days before the company’s disbandment.

Christopher Thompson (Amherst): Thompson was either born in Hatfield or Whatley. Henry Thompson was his younger brother. Christopher was a farm laborer before he enlisted on January 7, 1964. He received a $125 bounty. He was eventually discharged at Clarksville, Texas.

Genalvin C. Marse: Marse is assumed to be black because his grave is located in the African American section of West Cemetery. According to the 1895 Amherst Directory, Genalvin was employed as a janitor at the Amherst College Chi Psi Society House, a fraternity. The “Boys of Chi Psi” erected “his monument as, ‘A loving tribute to a faithful servant’” (Romer, “Civil War Veterans”). A GAR marker on his grave indicates that he was a Civil War veteran. Federal records take note of numerous black soldiers from Massachusetts and elsewhere with nearly identity names. Further research is required to confirm his status.

For information about the mural at West Cemetery, visit A Guide to the Amherst Community History Mural or copy link:

You can do it, too! Sign up for free now at https://www.jimdo.com

Dr. Amilcar Shabazz, chair of W.E.B. DuBois Department of Afro-American Studies, and instructor of the class "Heritage Of The Oppressed." Thank you for reminding us the importance of learning the stories of the "other."